What a race night.  Beautiful wind and lots of boats.  We had new crew this evening, Cliff and Ethel.  She was a coworker of Hannah's.  While Cliff worked until last Wednesday.  They were a game crew.  It was their first time on a "little" sail boat.  They had done a sail on the Zodiac in the Salish Sea, but never on a 28' sloop.

The afternoon when we got to the boat, there was no wind to speak of.  By the time the race started we had 8 knots.  We got out of the marina about 5:15 and set sails almost immediately.  We had to sail by the committee boat twice because our course was not on the board the first time.  The course was Start-2-14-2-C-Finish. A long course for us, but doable.

About ten minutes before our start, I noticed that the main sheet was being held to the boom by a accidental line.  The cleat on the boom had fallen off.  She's an old boat.  Things like this happen.  I took a short line and tied the sheet's shackle to the main sail around the boom.  I will  have to put in helicoils and new machine screws.  The temporary repair was done before the 4 minute warning.

We were second around the first windward mark and caught up to the first boat, Estrella Del Mar.  We passed her for a time, but eventually he passed us.  We were trying to get to shallower waters, but they did not help and we gradually lost time.   We put up the whisker pole right after the mark and kept it up until before the 14.  We lost about 4 boat lengths in taking down the pole.  I put the pole on the deck and clipped it to a halyard at the base of the mast.

We round 14 and went to port close hauled.  Went over to the Washington side and then tacked to starboard close hauled.  We were making good time but not as good as Estrella.  We were getting close to mark 3 when two J24's passed behind use after rounding their mark. I heard one of the skippers of one of those boats yell something.  About that time a J24 appeared really close to us in front of us on starboard tack.  We hit them abaft the beam in their cockpit area.  Aventura rode up their side bending two stanchions.  A phone call to the owner of the other boat revealed he had an injury to his knee and the traveler on the boat.  They were pretty shaken by the collision.  I made sure they were OK and continued racing.   The anchor was out of place but still with the boat and the whisker pole was bent.  We both were not looking behind our head sails.  We both were surprised.

The race was shortened to Buoy 2 and we placed second.  Furled our sails and went back to the marina.  Cliff is a machinist and took a look at the pole.  I got him a few tools and he was able to affect a repair.  The pole is now a little shorter but long enough to do the job.

I placed an insurance claim on the incident, since the other boat owner said he was going to place a claim.
Posted by Ken of Aventura at 11:38 AM No comments:

This was a different course from any previous courses we have done. The course was for a west wind and was 14-R-14-R-14. Nice race layout for the wind. We decided to do a port tack to the mark. We got a good start. We were third across the line. Bill Ormond came as crew, but I put him on the tiller this race. It turned out to be a nice change. I got to work hard on the sails and Bill took it easy on the tiller. Shortly after the start, about 2 minutes and 1 second after. Somehow the jib sheet hooked the whisker pole and tossed it into the water. Bill looked at the race and then looked at the pole and then looked at me and asked shall we get the pole? I said yes and Bill pulled a neat figure eight under sail to pick it up. I tried to reach down and pick it up, but could not reach the water without risking going overboard. Bill went into another figure eight under sail while I pulled out the boat hook. This time I was able to snag the pole and bring it aboard. The track is below. This maneuver cost us about 2 minutes, which is not bad. 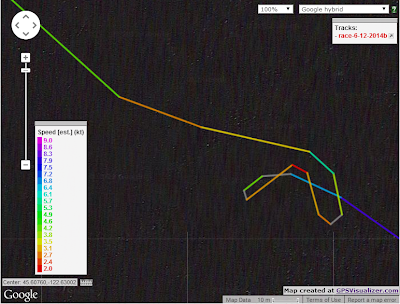 We were last around the first windward mark.  We caught up and passed two boats by the leeward mark.  That left three boats ahead of us.  Goose had dropped out because of a broken steering cable.  We rounded the second windward mark still in forth place.  Estella Del Mar, La Dolce Vita, and River Weasel were ahead of us.  We caught up and passed River Weasel because he decided to jibe halfway to the finish.  We stayed on our starboard wing on wing with the pole out to starboard.  We think we finished third. Results are still not posted.

The track of the race is below: 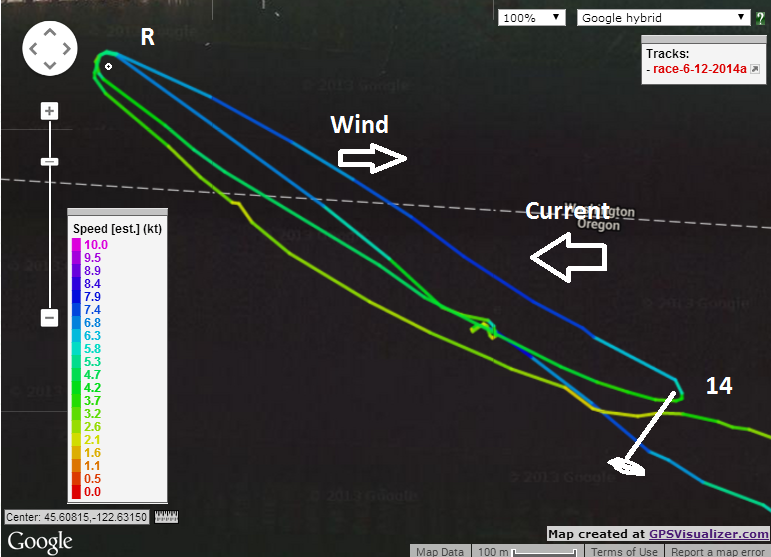 Posted by Ken of Aventura at 2:47 PM No comments:

A mediocre start for this B-2-C-B race.  Winds were out of the north north west. A typical, for this year, wind condition.  Since Rich Jones was off sailing, the RC setup the course.  They made it easy on them by setting only two marks, C and the start-finish mark.  We were in the middle of the fleet and then tacked to port for clear air and more down river current.

Then the first of two interesting events happened.  We were on port tack and I reached to turn off the cell phone's klaxon.  It does that after timing the start.  I am pleased how we can use it for timing our starts.  The only problem I have with it is the loud klaxon after zero.  I reached for the phone and got us in irons.  If you look at the track you will see a kink in it just after the start.  That is my turning off the noise and having to do a 360 to get back on port tack.  We rounded the mark after River Weasel and set up for port broad reach. This sail set allowed us to meander over to the shallower waters and stay in clear air.  It did not allow us to catch or pass anyone but trigger and the two Capri 22's.  River Weasel went over to the Oregon side and sailed up that way.  Scape went over with him and stayed ahead of us.  We caught up the Scape at the leeward mark and rounded just after him.  We stayed on port tack until we could make the committee boat end of the start-finish line. Scape tacked early and we were able to tack above him and make up distance until we were overlapped.  We were making the committee boat, but he wasn't.  They tried to tack but our position prevented it.  The crew made Scape very aware of our presence when they tried to tack.  They were surprise to say the least.  They returned to starboard tack and then tacked behind us.  By that time we were over the finish line ahead of them.  River Weasel and LDV were ahead of us.

We placed second this Series. 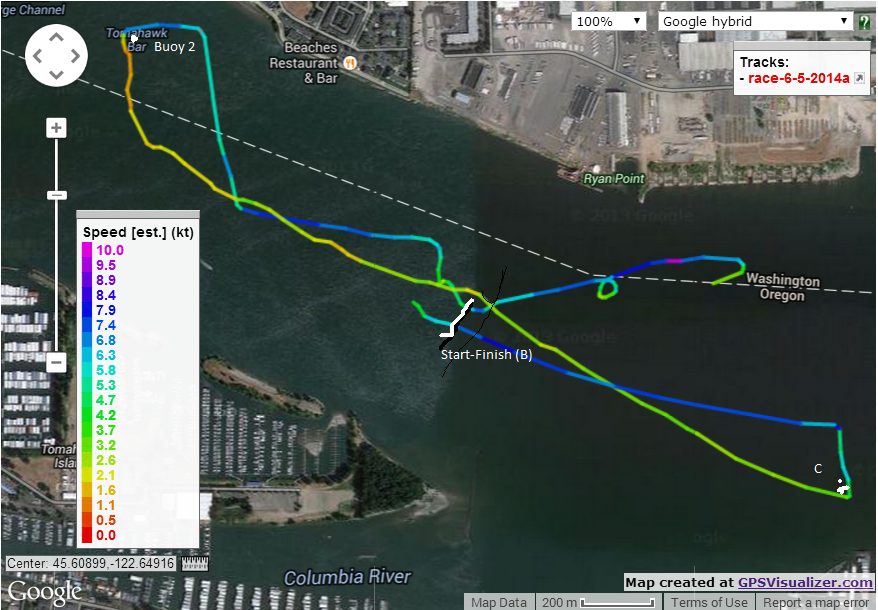 Posted by Ken of Aventura at 11:34 AM No comments:

This was a memorable race.  Only one courageous crew showed  up for this one.  Doug did his best.  We did place second after running into trouble at the first windward mark.  More on that later.  The course was B-2-R-2-R-B.  Nice windy night with an average wind of 9 knots dying to 5 knots late in the race.

We had a good start.  We crossed the line 20 seconds after the horn on starboard tack.  The marker was far enough out in the channel for us not to do a quick port tack.  We staid on the port tack for quite a while.  In fact we staid on the tack too long.  When we finally did go to port tack the mark was dead ahead.  La Dolce Vita (LDV) made it to the mark about 5 boat lengths in front of us and rounded the mark.  The had the usual delay of getting to downward sail set and sat at the mark blocking our course.  They set their boom to starboard, so we were on the same tack.  They were making a little speed so I chose to go behind them.  We were abreast of River Weasel who also chose to go behind LDV.   But they had not cleared the buoy enough to give me room to round the mark.  I had to turn down river and pass the mark to starboard.  We turned around to a broad reach and headed up river to round the mark.  At this time two other boats, Bright Angel and  Scape, rounded the mark and had us boxed in.  We had to slow down while they sailed ahead.  Check the rough plot of the windward mark below: 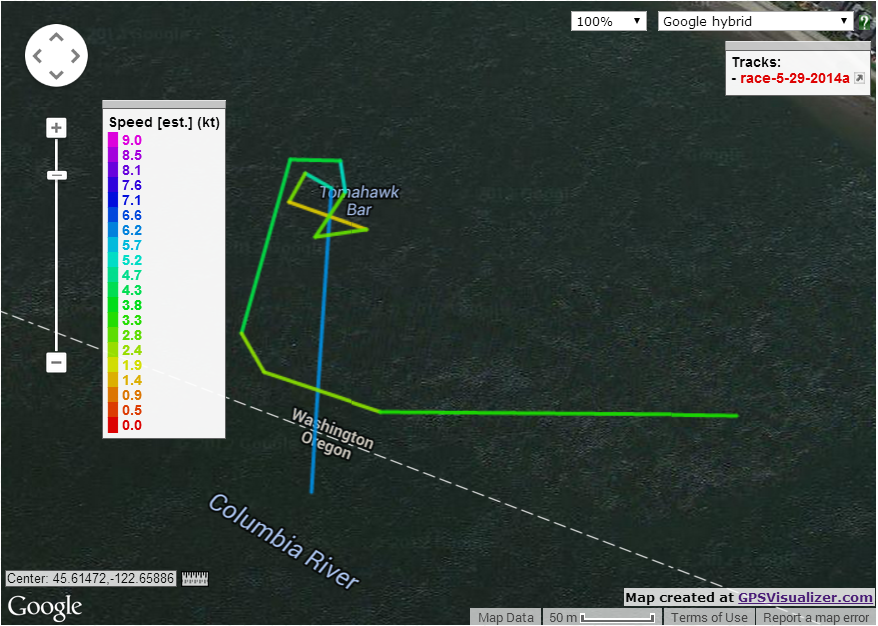 This maneuver cost us over 2 1/2 minutes.  We came out of the mark in last place.

We caught up and passed 4 boats in this next leg and rounded the Ryan Point Mark.  We stayed away from the point on the downwind leg, because earlier we discovered both a current and wind disadvantage there.  By the time we rounded the mark we were in third place.

A note about the poor detail in the tracks. I finally reread the manual on OpenCPN and discovered the setting I thought managed track density was not the one I wanted. I have now set the track density to "high".  The tracks should improve in the following races.

Posted by Ken of Aventura at 3:22 PM No comments: