This was fun. The wind was up and the course board was confusing. The RC decided to save time and effort and combine pennants with the same course on the same line. I took it to mean that there would be only four starts, but as later pointed out to me there were six starts as usual. There were no plus signs between any of the pennant numbers. DUH. That explains the interesting squiggle at the beginning of the race. We started twice. Actually we were going to start three times, but noticed that only the rangers were starting on the third start so we bowed out. We did start in the fourth start, but noticed that our fleet flag stayed up after we started. Strange. Then it occurred to us that we would have to start again. Thus the squiggle.

At this time I would like to thank my crew. We managed to snag Gary K. to help Bill S. Gary owns Blue Streak, the other SJ28 that should have been racing, but he has been having more fun crewing on other people's boats.

We had a decent start, right behind La Dolce Vita (LDV). It took us some time to figure out where we were after our first start and managed to get started alright. We managed to round the windward mark second and get our whisker pole out to port to make the downwind run. The wind was about 8 to 10 knots with gusts to 15. We meandered over to the 20 foot depth and headed for 14. The gusts would get us going about 7+ knots. The water off the bow and stern was the loaded I have heard on Aventura. Then about 3/4 down the run, a gust exploded the whisker pole. It broke in half. Half going in the water and the half attached to the mast stayed with the mast. We were contemplating taking the pole down because of the usual problem of the wind going to a beam reach from the broad reach at times. This is caused by the boat getting ahead of the wind or the wind dying while the boat continues with its speed. We were gaining on LDV until the pole exploded. So we finished second, again. This puts us in third place, but tied in points with River Weasel and LDV. They each have a first.

I bought a 20' length of 2" diameter .065 walled aluminum tube to replace the whisker pole. I am going to cut it at 15' and use the end I have and make another end for the sail on my 3D printer. It is a 7 hour build. I am waiting for a day where I will be home for the build. I am just too busy being retired. Probably build it Saturday, during the rain.

Posted by Ken of Aventura at 9:21 PM No comments:

I can't believe I have not posted in over two years. The race was course TT ( Start-1-3-1-3-Finish ). The wind was like the normal summer wind from the west-northwest. Poncho put a "1" buoy out in the middle of the river across from McMennimens. The "3" buoy was located off Rose City Yacht Club. The committee boat, start, and finish was about at "C" mark. Crew for the night was Bill S. and myself.

We chose a starboard tack to start at the mark end of the start line. We had made a run at the mark and discovered it was way over toward the Oregon side of the river from the normal start lines. We adjusted. We were a little early to the start at 7:00 PM. We are in the "C" Cruising class with La Dolce Vita (LDV), Braveheart, River Weasel (RW), and Blue Streak. Blue Streak did not show. We walked the line for the ten seconds and turned when the flag dropped. La Dolce Vita was on our tail while the other two boats where behind her. We went to port tack as soon as we could to get over to the main channel to get into the current. Upon looking at my track later I discovered we tacked too soon back to port. If we waited a little longer we could have remained on port tack long enough to eliminate two tacks later. The wind was good enough to carry us. We ended up tacking to starboard a little early and passing behind LDV. They were making better time to wind than Aventura. We are going to have to experiment with the sail settings now that she has new rigging. The head sail sets differently now. We tacked back to port to get up to the windward mark. We were doing fine until I heard Bill say we are in a collision course for Braveheart who was on a starboard tack. In the moment all I could think to do was a 360 turn, which would get us up behind her and clear. You can see the kink in our track before the windward mark. It shows as a yellow area between two light blue tracks. On hindsight I think if the crew was ready we could have just tacked to starboard and be in front of Braveheart and to leeward. We would be almost in a line to the mark if we headed the boat a little. The result was that we were the last around the windward mark.

Bill set the whisker pole to port with the boom to starboard making us on a port tack downwind. We inched over to the 20 foot depth and then headed for the leeward mark, which I did not see for quite a while. We ended up looking a the track not heading straight for it but a curve to the south. Meanwhile RW did a beeline to the mark. She stayed in the channel a little more. We were catching her for a while, until she got into the shallower water with more wind. We did alright because both LDV and Braveheart went over to the Oregon side and tried to beat the current but lost some wind.

We caught up to Shadowfax an Elite 36.1 owned by Michael Nance. He was in our class last year with Estrella Del Mar a 29' boat. He is living aboard his new boat now and carrying all his belongings. I latter learned that he hit Vaporware on the start of his race and spent some time untangling the two. In the track you can see where he slowed us down toward the end of the leeward leg of the race.

We rounded the mark with Shadowfax who turned to a starboard tack while we turned to a port tack to get back the the main channel and the current. About that time a barge had to come up from the I-5 bridge through the racers. He was far enough downstream that we went to the main channel and tacked back to starboard and headed over to the middle out of his way. We sailed on starboard looking for the windward mark. By this time the sun was setting. We could not see a mark. So I headed for buoy 2, thinking the mark had been picked up. We finally picked up the mark and saw Poncho off to the starboard of the mark. We could see her navigation lights, but could not see a flag. But why else would she be down by the mark, but to shorten the course. It was getting dark anyway. We finished second. 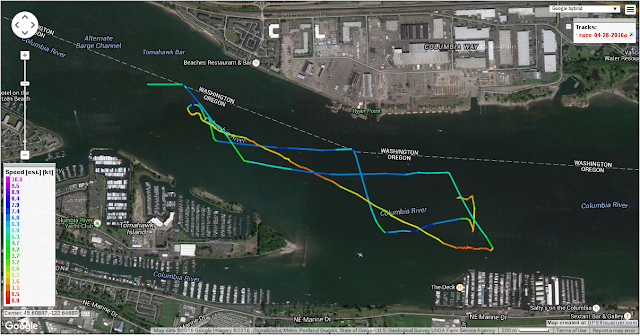 Posted by Ken of Aventura at 9:36 PM No comments: