Thursday, April 22, 2010, marks the first for us. We came in first out of 6 boats. We race in the Cruising-S fleet of nine boats. Two started, but did not finish. One did not come by the committee boat.

Nice to get back out on the river to race. Of course we had to have at least one misadventure, this is sailing. Again it was while leaving the slip. I backed out of the slip without mishap, but did notice I back out in front of another boater. But he was well away from us and if I would just get moving down the fairway, I would not have been in his way at all, but . . . . Instead of putting the engine in forward to turn and go down the fairway, I put the boat in reverse. The tiller being put to starboard made the boat just back up faster until I realized we were in reverse and weren't going the way I wanted. We bumped into the boat across the fairway from us. We did get away from the boat after the crew fended us off. Instead of just leaving we went back to the boat. The only thing I could see was that his outboard motor had flopped over. Aventura did have a scuff mark from the motor. Later, Warren from Second Half inspected the motor and put it straight. He said he would talk to Mike the owner of the boat and tell him what happened. But It looked like there was no damage and that I would not have to buy the boat.

After that, we went out to find the race. The winds were very light, less than 5 knots. We went ahead and put up the sails and started up river to find the committee boat. There was already a mark placed just out of the entrance to Tomahawk Bay Marina. This is "T" mark. "B" mark was set at the coffer dam at the east end of Tomahawk Island. Poncho was down at Buoy 14. We sailed until 6:10 and then restarted the motor. By then the come-by-me flag was up. We fell in line and got our race sheet to discover we were in the fifth start. I had to reset my count down timer from 20 minutes to 25 minutes.

We discussed tactics. The wind was building. Our race was 14-T-14. Simple short race. I wanted to stay in the center of the river to use the faster current there while going down steam to the windward mark. One possibility was to start on the port tack, but then we would have to dodge traffic at the start. So we joined the rest of the boats on starboard tack at the start. One boat went over early and had to go back. We crossed the line about 4th and at its middle. We sailed over to McCuddy's and tacked to port tack. We dodged the starboard tack boats without incident. Crossed the river and tack to starboard tack, but had not gained enough downstream to make the mark on that tack. So we tacked again about mid river to port tack. We did not have any traffic. We were essentially following Shamrock the whole course. Everyone bunched up at the windward mark. We round fourth and were surprised when the three leaders were blanketed by our sails. They slowed down while we stayed in clear air and actually passed them. We put the spinnaker pole up to port and headed for the committee boat. The other three leaders headed for Buoy 14 which meant they were in the middle and the stronger current. We stayed in the 20 foot depth and slower current. We inched our way ahead of the rest. About a quarter of mile before the finish line, we hit the zone where we get tricked into thinking the wind is dying. There is a zone in the river where the wind from the gorge and the wind from the ocean meet. The sails luff when the boat catches the wind. Sometimes it's enough to fool the skipper into changing sails, thus loosing some momentum only to have to change the sails back. We held our position long enough to cross the finish line first.

Shouts and high fives all around. Not bad for the first race.

We actually had a knot meter this trip. This is only the third head for Aventura. The first one was not working when we bought her. There was a new one in the box that came with her. It was newer and had a different connector for its transducer so it was not just a simple replacement. We installed the new transducer and ran the wire to the meter and installed it. It worked for two seasons, then quit. I repaired it once. Then it quit again. Last year Chuck won a $100 gift certificate at the awards dinner. He gave it to the boat. I used it to by another analog knot meter. This meter had the old connector with it. I plugged the old transducer that was still lying in the fore peak into the newer used meter and it worked. So it is installed now. Still needs calibrating, though. Because when we were doing 5 knots or better it was reading only 3 knots.

While sitting around back at the slip celebrating our win, we toasted our beers with "The only way to go now is down." We all laughed flush with our victory.

Here's the plot of the race. Looks like we need to work on tacking. 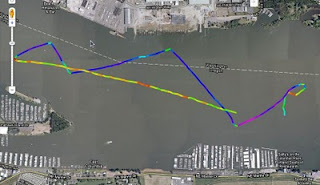 Thanks, crew: Chuck, Bill, and KD
Posted by Ken of Aventura at 10:25 AM No comments:

Picked up the boat from Schooner Creek Boat Works on April 1, 2010. She looked very happy to have a clean bottom and waxed sides. The greased prop helped. I noticed immediately the difference when the engine turned off. There was vary little drag and her carry was much more. Very nice.

We held our practice sail this Thursday, April 15th. We had our misadventures. Really only two. The crew, Bill, Chuck, KD, and myself are adjusting to each other. Bill and KD made a good cockpit team with Bill leading the pair. Chuck took to the foredeck to avoid the chaos of the cockpit. The San Juan 28 has a small cockpit for a 28 foot boat. Four people can sit cosily in it, but sailing gets it quit crowded very fast.

The first misadventure was when the port jib sheet overran itself on the wench. At least it happened at practice. We were able to use a fid and pry the sheet over the wench to get a loop free. Once that happened, we were able to get another loop and then free the line. But not after having the several hundred boats out there pass us in the non-race (just kidding).

The second misadventure was suddenly presented us by a long loud toot from a tug. Those barges on the river are ever present and sneak up on the unaware quite silently. We had just practiced rounding the upwind mark at buoy 2. We were headed over to the Oregon side when after just settling in to a broad reach, the toot happened. The tug with 4 barges was about 500 ft downstream and coming at us pretty fast. So we turned tail and ran back to above the buoy for another practice rounding the mark. Discretion being the better part of being run over by a barge.

The practice weather could not have been better. There was the normal evening breeze of 5 knots from the west. There were a few other boats out there practising or at least enjoying the evening. The wind died about 7:40 so we were out there about two quick hours. We then retired to the marina where we enjoyed a round of beers to celebrate the beginning of another racing season.

Thanks, crew to a great evening. I am looking forward to the season even more than before.
Posted by Ken of Aventura at 10:32 AM No comments: