As the headline says, the race did not count. We raced for 1 hour and 45 minutes. That's when poncho came with the "N" and "A" flags flying to abandon the race. But it was a fun race anyway.

Crew this evening were Bill S. and Chris D. Chris is the new guy. He is filling the vacancy caused by the "old" guy Bill O.. He bought his own boat in the last couple of weeks and my not be with us long. We shall see. It was good to have him along. Bill S. is training him well.

We had a mediocre start. We were fourth out of five. Yes, all five boats were racing tonight. Blew Streak had the best start. I think he started by the mark while the rest of us fought it out by the committee boat. Again the wind was light at the start. We figured that the race would be shortened at 2. By the way, the race course was 14-2-14. The committee boat used the buoy 14 as the finish line and set a start mark to the Oregon side of the boat. We were third in our group and in dirty air. We tacked to port to get to the channel and clear air as soon as we could. But we had to give La Dolce Vita a lead so we could tack. She was above us and we could not tack in front of her. We had to wait until she passed to tack to port and get to the channel.

We got to the channel and tacked so we could avoid Ryan Point. On starboard tack we had rights, but did not need any. We were not challenging any leaders. We tacked twice after that to get to the windward mark. We rounded the mark in third place. We had improved our standing by one. We set the pole to starboard and meandered over to the 20 foot depth. We were closing on the leaders, except for Blew Streak, who was doing a fabulous job of leaving us behind.

The wind died on us twice. We anchored twice. We started sailing again about 8:30 and were doing 3 knots when Poncho III came by with the abandon race flags at 8:45. Since we were sailing we continued trying to catch Blew Streak, since we could sail. The wind was building to 8 knots. We did not catch her. She "finished", or should I say she went by buoy 14 a little before 9:00. We "finished" going by 14 about 8:59. We tacked to starboard and had a great sail back to Tomahawk.

Boy did we have a good start. The Bill's were crew tonight. I kept hearing too soon between the count down to the start. 20 "too soon", 15 "too soon", 10 "too soon. Until I said let's go for it. We were first across the line. We were a little early, but we walked the line with the rest of the boats, but we ducked in between two and hardened our sails and took off. Before we knew it we had a couple of boat length lead over the second boat. We actually had a 5 boat fleet tonight. Instead of doing our port tack at the line we usually do we continued ahead of the fleet until we could pass the drydock on the Washington side on the down stream side . I was hoping to be able to make mark 2 on this starboard tack. We waited until the last moment to tack to starboard down stream of the drydocks. We tacked but had to tack again to make the mark. We were first in our fleet to round the mark.

We set the pole to starboard and was being pursued by the other San Juan 28 in our fleet. Blew Streak was being sailed by husband and wife team of Gary G. and Mrs. They came on strong for a while and almost passed us. We wandered over to mid-river and sailed on this tack for almost half the way. You can see where we increased our speed on the track below. At this point we actually changed the pole over to the port side. Normally this move does not pay. We usually loose ground because the head sail is not pulling during the switch over. I wanted to go straight to 14, our leeward mark, but could not do it on the previous tack without sailing very by the lee. My crew gave me looks that could only be near mutiny, but they did change the pole. Thanks. We maintained our speed and our lead. We even caught up to Barcode, who is in the previous start.

We rounded the mark with Barcode and set a starboard close hauled to the finish line. We could not keep up with Barcode to the line, but we kept our lead.

Other points for the evening was the wind was out of the west and very light at the start. It built during the race. We caught up the the previous fleet because we rode the building wind down to the fleet. Very interesting race and the results help make it memorable to us.

Posted by Ken of Aventura at 9:48 PM No comments:

This was a frustrating race. But, at least, it was a race. The wind was calm up to 6:35. There was a little rain, but it stopped about the same time. Then the wind came from the south and built from 4 knots to 6 by the start of the race. We watched Poncho II set the number one mark. It sure looked close to the shore. It was leeward of a stand of trees. I told the guys there would be no wind there.

The committee boat picked up its anchor and moved to about "B" mark. The start buoy was set upstream while the finish buoy was set downstream. Mark 3 was set at Ryan point.

We chose to start at the mark as it was really the favored mark. My plan was to use the momentum of the boat to round the mark. All went to plan. We came inside LDV at the mark. What was not to plan was all the boats sitting at the mark due to being in the lee of that stand of trees mentioned above. I had no choice but to go around the 6 to 8 boats lined up at the mark all becalmed. I had enough carry to get to the front of them, but not enough wind to go around the mark. We sat there getting puffs of wind moving us forward only to have it die and then drift us back. We did this for almost 1/2 hour. Unbelievable. So we finally get clear and LDV has long gone and made her other marks and was finishing at the time we were crossing the start line for the second time. So I chime up and say we got the horn as LDV got her well deserved horn at her first place finish. Of course, we had to go to the leeward mark yet, but it was fun anyway. We finished the race without incident. The race committee was sure glad to see us finish as we were the last boat for the night. I can say we were glad to finish.

We had a new crew member this evening. His name is Chris D. This was his first race in many years. He raced off of Honolulu many years ago and is looking for a boat. I got his email because the fleet captain email forwarding had not changed to John Osborne's email address. The universe works in very strange ways. I have been looking for a crew to replace Bill O. who is moving on. Bill O. has been excellent crew for more years than I can remember. I do remember the first day he crewed. I was short of crew as usual. Here was this guy with a boat two slips away and with nothing to do. So I asked him if he would like to crew. He has been with me since then. I will miss him very much. 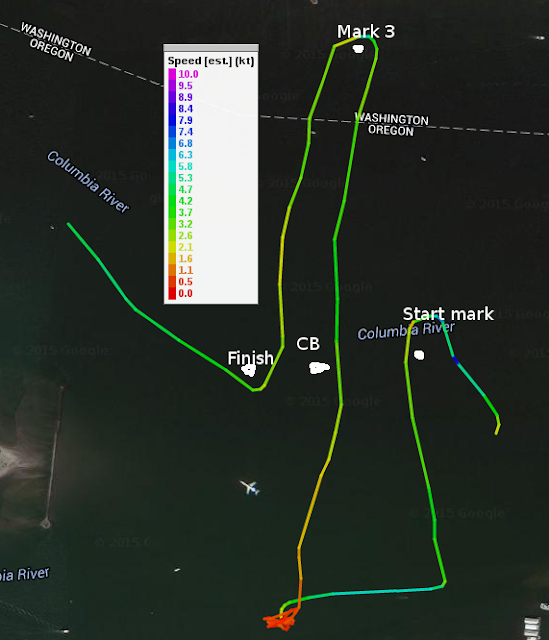 The Mark (About 30 minutes). The boat was facing upstream all the time. That is to the right in this picture. 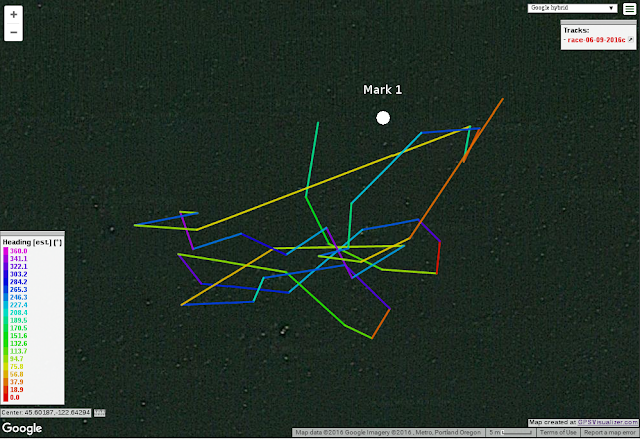