We also chose not to be first on the line. We did not want to get in the big boys who go much faster than Aventura. We were about 10 seconds behind the horn while most of the fleet was ahead of us, Breakaway was to windward and a few boat lengths behind us. We waited until we could clear to tack to port. I just wanted to get over into the channel and get its current to help us keep up with the others. We tacked back to port early and continued to the mark. The only boat that had to duck us was Wildheart. La Dolce Vita and Blew Streak both passed in front of us. We tacked to port off the east entrance to Tomahawk Marina. We tacked to starboard at condominiums. We tacked too soon to fetch the mark and had to do two quick tacks letting Wildheart pass us. We rounded the mark and set the pole to port. We went to the center of the river and gained on the fleet. The knot meter hit 7 knots once in a while. The track shows were averaging 5.3 knots. Hull speed for Aventura is theoretically 6.23 knots. There were grins all around the crew. About 200 to 300 feet from the leeward mark the whisker pole buckled and broke in two pieces. That's the second pole Aventura's 135% furling head sail has destroyed. We were lucky and both pieces remained aboard. The crew quickly brought the head sail across and set a broad reach. John went forward and secured the two pieces of pole. We were able to maintain most of our speed but was loosing ground to the fleet. Blew Streak and Le Dolce Vita rounded the mark first and second respectively. Wildheart had gone wide and we were able to duck inside and round the mark third. We tacked to starboard heading directly to the finish line. La Dolce Vita had tacked to port and went a ways on that tack before tacking to starboard. By going directly to starboard we were able to obtain second. Blew Streak finished first.

The course plot is below: 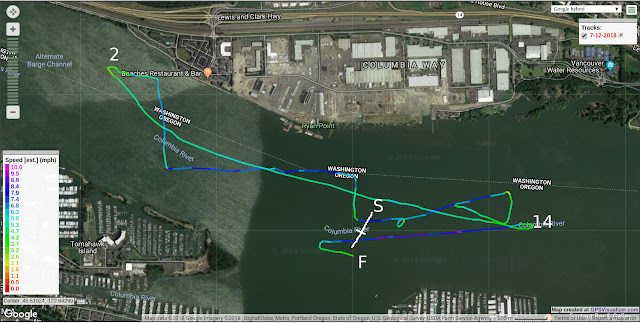 Posted by Ken of Aventura at 3:48 PM No comments: