This is already almost the last race of the season. I have not added to this blog. This entry is for the first four races. 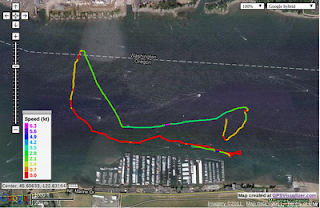 Weather was overcast with a few sprinkles. Wind was light. The race was ambitious. The race committee delayed the races for 10 minutes, which made us start 5 minutes after 7. The wind was dying. It was about a 5 to 6 knot westerly wind to begin with. But was dying. The race was 14 – R – X – R – 14. We were early to the line, so we had to do a delaying maneuver and fell in behind 4 boats. We were on starboard tack. We waited to tack until we could make the mark in one tack. This meant coming to the mark on port with no rights. We watched the starboard tack boats and found a slot. We were behind two boats, Second Half and Avenger. The we set our new whisker pool and headed for X. But the wind was dying. We sailed to the end of the wind just off of Salty’s. We anchored. We waited about 15 minutes. It was cold. It was wet. We did the unforgivable and started the motor and and retired from the race. Just about that time Poncho came down from the already shortened race at X to the line of other boats still sailing or anchored. They counted those races and placed them in the race. Since we had retired, we were judged DNF.

The wind for this race was out of the east at about 4 to 5 knots and fading. Again the race committee delayed the race for 10 minutes. We started at 5 after 7. But the wind was so lite that we had to start amongst the previous fleet. We actually started about 10 minutes late because the wind was so light that it took that long to get to the starting line. Starboard tack would get us across the river, while port tack we actually made a little upstream, but not much. We crossed the start line many times. We just could not make any upstream headway. We keep encountering the RC boat. I made the comment more than once that the RC was sailing better than we were. It was anchored. We finally got smarter and started noticing the darker water and staying within that. We were making headway toward the X mark when Poncho came and terminated the race.

One interesting moment during the race was when we were crossing the start line on starboard tack one time, Second Half almost hit us. He was on port, thus I was the stand-on boat. I could not see him through our head sail, but my crew warned me about Second Half. I yelled “STARBOARD.” I heard an “OOPs” and the next thing I saw was Second Half’s stern about 2 feet from our port beam. We sailed on, but he was completely out of shape and heading down river, with the breeze. 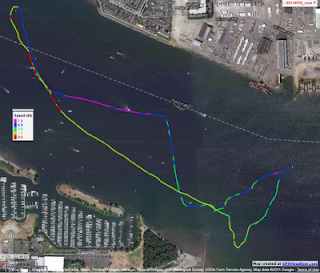 This was a short race, C – 2 – C. The race committee is learning. We started early and had to do a delaying maneuver, again. Timing has been bad this year. The RC keeps throwing in delays that shift the starts. We started on starboard tack with the fleet. but in bad air. There was room to tack to port and get out of the bad air. We sailed to the middle of the river, where we tacked to starboard and road the current there. We stayed in the middle until off the west entrance of Tomahawk Bay Marina. Back to port tack. We were able to make the mark ahead of the rest of the fleet by a boat length. We rounded the mark but lost about three boat lengths coming about. The whole fleet put out whisker poles to port. We managed to get in the lead, but being shadowed by the slower boats could not keep it. Avenger was doing great. Second Half and Estrela Del Mar were in second and third respectively. Second Half was edging in on the starboard finishing mark and edging out Estrala Del Mar. He did not give mark room to the other boat who called it. He was suppose to. He later withdrew from the race after finishing, which made us, who came in third, well actually fourth, second.

Again a short race. The wind was from SSE. This made the race a cross river race. The course was R – C – R – C – R. We had fun before the race. The wind allowed us to hold position in the River with just our main. So we sat just outside the starting area and watched the other starts. The RC delayed the race due to a tug/barge in the channel just at the start of the first race. The started the first three races without a hitch. The delayed the fourth and our races because one of the earlier races was rounding R, the starting mark. This caused a lot of traffic. This also caused our timing to be changed. We were not synchronized well with our start timing. Our plan was to stall at a the starting line and then get under way a minute before the race starts. We were very close to the start line. I figured we had about a 30 second run to the line, once we started. The one minute warning went. So we waited what we thought was 30 seconds and started. We were at least 20 seconds late over the start. With a race this short, that makes a difference. Second Half took off like a rocket. We were with Avenger and Second Half for a while, but could not point as high as either of them. Second Half tacked early. We waited until we were well above the mark before tacking and made the mark on this next tack. No boats were near when we rounded the mark on port tack. The run to R was a close reach. We made that with inches to spare, too. We watched Second Half round the mark and loose 4 to 5 boat lengths getting around. I asked the crew to see if we could get around without loosing too much ground. We did better by only loosing 2 boat lengths. We did not stay on starboard tack as long this time thinking that the slower current by the mark might give us better speed, so we tacked earlier. We got to a line to tack to starboard from port tack and tacked. The wind was doing some fluky stuff, but we did make the mark with Tangera close by. Tangera is in the fleet that started just before us. Their course was longer. For this next leg, I sailed it like the second, but I should have sailed it like the fourth. I mean that instead of just doing the broad reach, we could have done a broader reach and get more speed by heading for the upstream committee boat. We did finish second, again. This time not because of any penalty.

The crew commented how they liked “parking” at the start line and watching the starts instead of sailing hard up and down the river. It was much more relaxing and educational watching the other starts. Plus we did have a good view of the Committee boat and flags.

Posted by Ken of Aventura at 9:05 PM No comments: