Crew was Justin and John. Course was Start-2-14-Finish. Wind was light, but 4-6 knots with gusts to 7. Only two boats showed up for the race, Blew Streak and Aventura. That is probably why we got second.

We had a good start but again in the middle of the line. Starboard tack with all the big boats coming up on us very strongly. We were quickly in bad air, but could not go to port until Candoo caught up to us. Once that happened we tacked to port. Blew Streak was late across the line,but had clear air and continued on starboard tack. We did not go to starboard until very close to the Washington shore. We waited until the edge of the wind line to tack. Blew Streak had to duck behind us on port tack. We tacked to starboard and ducked behind Blew Streak on the lay line to the mark. We set the pole to port and since the wind seemed to be coming from the northwest we stayed near the Washington shore. MISTAKE. The wind was not kind and we got shadowed by the buildings. The track below shows the red. The map does not line up the shore properly. We seemed a lot closer than the plot shows. Anyway, Blew Steak took to the middle and we never saw here again. But we did have clear air once we cleared the buildings, but it was too late. Everyone else had left us behind. Enough said about that "race".

The track is below: 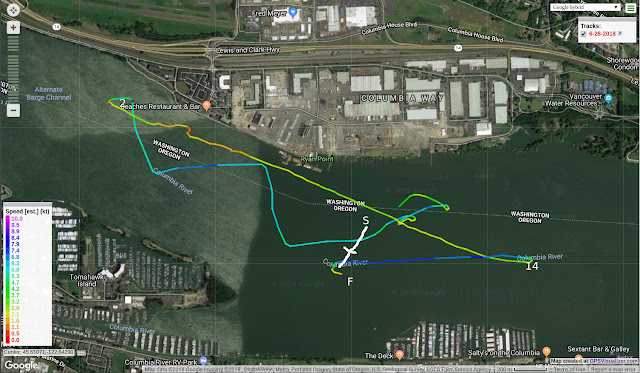 Crew tonight were Justin and Aaron. John was under the weather and did not come out. The wind started out very light and built to a good 6 knots by the end of the night, typical summer wind. The course was "V", Start-1-4-1-3-Finish. The initial call was to use Buoy 2 as number 1, but was revised over the radio to a mark. We did not receive the notice, but I did hear the four horns and saw RC on the radio. Did not know what the announcement was about and forgot about it until we noticed the fleet using the mark instead of Buoy 2. I need to set the handheld on the RC's hailing frequency, channel 72.

This race started off badly. We were almost becalmed on port tack just trying to get above the starting mark when La Dolce Vita came at us on starboard tack. La Dolce Vita yelled at us a protest because she had to alter course to avoid us. La Dolce Vita was sailing on the current's wind and what little breeze we had. I estimated the breeze to be 3-4 knots. We had little maneuvering room because we were windward of Upstart and had to give her rights. La Dolce Vita displayed a red protest flag and made sure we knew we were under protest and had to do a 360 turn to exonerate ourselves. We did it later. We made it around the start line and went to port close hauled tack. We had Blew Streak on our starboard and she went to port tack also. We rounded the windward mark. The crew did a great whisker pole set to port. The wind died and we drifted back a little until finally it built back in and we got going again. The wind was very light, but we were able to grab the lead half way back to the committee boat. I wanted to stay in the middle of the river because earlier we noted that the wind was very light on the Oregon side. We managed to get by the committee boat but the wind was just barely keeping us up with the current and we almost drifted backwards over the finish line. We got to the mark 4 with a line of six boats. There was a little boat on starboard tack on our port two boats over. The rest of the fleet was on port tack so had to give the starboard tack rights. When the first boat got within 3 boat lengths of the mark, we all were overlapped, thus had to provide mark room. That's when Upstart shows up from starboard on an almost beam reach port tack on the starboard of Blew Streak. Upstart yells mark room believing he had mark room from the angle he was approaching the mark. He was well outside the 3 boat lengths from the mark. But the rest of the fleet was under the obligation to provide mark room to the boats inside. Upstart was lifting Blew Streak believing he had rights. Thus I was watching the boat I had to clear while Blew Streak was watching Upstart who was leeward of him. The next thing I know is Blew Streak came over and landed on Aventura. Our gunwale was under hers and we was stuck. Blew Streak and Aventura pivot so that all Aventura's wind was shadowed by Blew Streak. The current kept me plastered against Blew Streak. The wind kept Blew Streak plastered to Aventura. Upstart gets entangled with us. I have no power due to not having any wind. It took us a while to disentangle. Thanks to Blew Streak who started his motor and back out of the mess. You can see what happened to our course at mark 4 below. We rounded the mark and hardened our sails on port tack. Blew Streak was on port tack up to Ryan's Point ahead of us. We tacked earlier than Blew Streak. We did our 360 turn also shown in the track below. We had to do a quick tack to port and back to starboard near the mark as we could not make the mark on our first starboard tack. We rounded the mark fourth and maintained our position until the finish. Again we had a few boats at the leeward mark to give mark room.

The crew did very well. Aaron was on the boat for the first time while Justin was returning to the boat from the spring series. 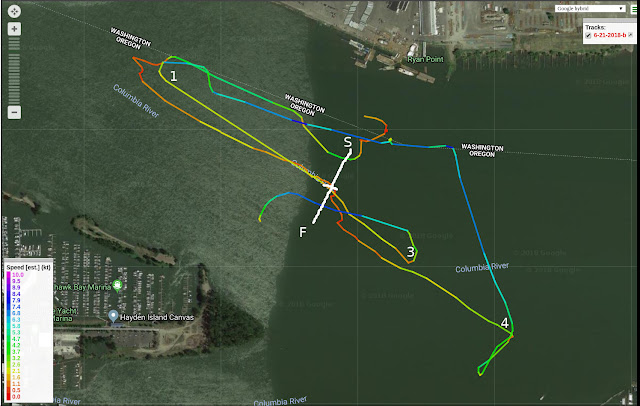 Posted by Ken of Aventura at 2:29 PM No comments:

Last week, no wind no race. One crew, Aaron. John misread the calendar and thought this was a by week.

Wind tonight was 6 to 8 knots from the west northwest. River level was 8 feet and dropping. This week we had only one crew and myself. Aaron got stuck in traffic and could not make it in time for the race. The course was "TT", Start-1-3-1-3-Finish. We used buoy 2 as number 1 mark. We were a little late to the start line, but by design this time. I really did not want to be in the crowd at the start. There are 15 boats starting at our pennant. We tacked to port once across the line and made our way to the Washington side. Tacked to starboard and continued till we tacked to port to make our starboard approach to the mark. We tacked to starboard in front of Wildheart and joined the line of boats to the mark. I went forward and handled the whisker pole while John took the helm and managed the sheets. At times on this downwind leg we were 1st, 2nd, 3rd, and 4th in our class. We rounded the leeward mark with 4 other boats. We were on the outside because we were leeward of three boats coming into the mark. We had to give mark room to the 3 boats.

We tacked to port and again went to the Washington side of the river. We did not go as far as Blew Streak who was a good 6 to 10 boat lengths ahead of us and to windward. I did not want to press too close to the shore with the crew we had. We continued on starboard tack and basically mimicked the first leg of the race. We had trouble with jibbing after the windward mark and lost ground to most of our class boats. We managed to make of time and get ahead of a few of them, but Blew Streak was way ahead of us. We rounded the second leeward mark having to give mark room to two other boats this time. John went forward at this mark to take down the whisker pole. We managed to dodge Vaporware's whisker pole going into the mark. Somehow it ended up in the water at the mark. We ran into problems with the head sail wrapping around the forestay. I had to go forward to free it. Meanwhile John got mixed up as to where the finish line was and started to head upriver to the I-205 bridge. I was able to get back to him before we got there and turned the boat around and finished before Vaporware who had to give way because we were on starboard tack while he was on port tack.

To see a full size plot go to https://www.cad2cam.com/tracks.html 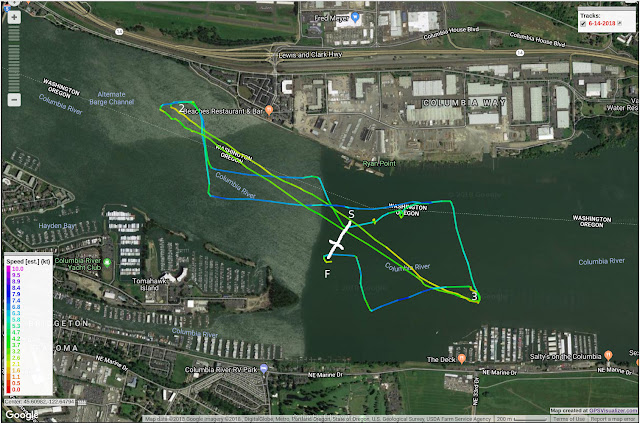 Posted by Ken of Aventura at 2:33 PM No comments: