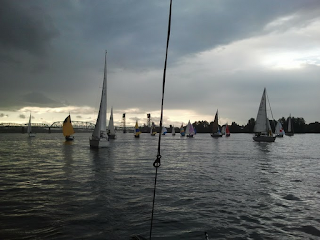 This was a race where we had a great start, but no finish. Above is a picture of us leading the pack at anchor. We had a good start on starboard close hauled by the mark side of the start. The course was "W", S - 1 - 4 - 1 - F. We were with the leaders at the start, but in order to go to the channel and gain the current advantage we tacked to port, but realized that we might be able to make the mark on starboard. We had passed the mark going to the RC earlier. It was up close to Goose Island in front of Tomahawk Bay Marina. When everyone arrived at the location of the mark, the mark was absent. Everyone agreed to go to 2 for the new 1 mark. So off everyone went to 2. The closer we got to 2, the lighter the wind. The wind lightened so much we dropped anchor. Thus the above picture. Eventually Poncho came by with the "N" flag signifying abandonment of the race. That was it.
Posted by Ken of Aventura at 2:56 PM No comments: 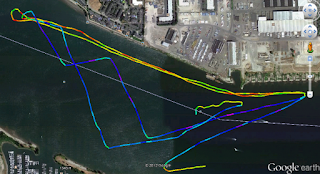 The crew this week was Bill O. and Chuck H.

There was some excitement before the race. I hit a boat dead on just 3 inches from its stern. We were both at fault. I was being a typical racer and cutting a line just behind a boat crossing in front of me. I was on starboard tack and using every bit of my right-of-way. The other boat was motoring and had his main up on port tack. I was going to clear nicely if, he had maintained his speed. But he stopped right in front of me. Just then a gust came and we started to round up, which was just the wrong thing to do. Bonk. Aventura received a small scratch on the bow and the Catalina 22 received a dent on her stern. We came around to check on the Catalina. The captain was just as chagrined as I was for the encounter. Talking with him later, I asked him why he stopped right in front of me. He said he was picking up a hat he had lost and was looking down and not paying attention to where he was. (Sounds familair, last week with the traveller event.)

The start of the race was also exciting. The race course was S-2-RS-2-RS-F. The "RS" means to leave the "R" mark to starboard. We had not caught that subtlety until we say the leading boats round the mark to starboard in the race. We also remembered seeing La Dolce Vita round the mark before the race leaving it to starboard and did not think anything of it, then. As I was saying, we wanted to start the race on a starboard tack near the mark end of the start line. This end was near the channel and since the wind was coming out of the northwest, this would give us the most favored start. We lined up on the mark close hauled starboard tack. Then two boats lined upwind of us for the mark. Since I was leeward boat and I was just making the mark I did not give them room to make the mark. They had to go-around to start. I did not make any friends on that move, but we did get a good start. We rounded the first windward mark first in our fleet, again. But had edged the mark too close to the wind that we ended in irons, which took all our lead away trying to get back steerage and start downwind again. We got the whisker pole up in nice fashion on this leg. We watched the lead boats take the first downwind mark to starboard. That's when the light dawned on us that we should, too. As mentioned previously, we had not noticed the "S"s on the course board. We stayed in the channel and made the second upwind mark in good order, only to have problems with the whisker pool. Ojibwe and Estrella del Mar were getting ahead of us. We rounded the last downwind mark third and maintained that standing at the finish. One tactic I used this race was watch what Upstart did. She stayed up close to the Washington shore after round 2, the windward mark. This allowed her to use the slackened current to give her better speed downwind over the ground. We played that game, too and it did help us a bit. I am going to watch Bill S. more often. He has been racing on the river for 40 years.
Posted by Ken of Aventura at 9:33 AM No comments: 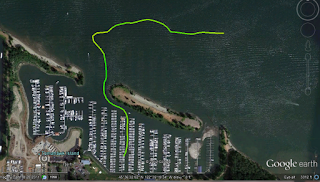 We actually went to Buoy 18. Just the netbook decided to go to sleep at the end of this track. Bill O., Bill S., and myself were sailing. We set just the head sail to begin with. This brought us to an over the water speed of 6 knots. About half way to 18, the wind died a little. It normally does the closer you get to the I-205 bridge. We raised the main while running with the wind until we could not raise it any more. We turned into the wind briefly and raised it the rest of the way.

After turning back to running with the wind, that's when it happenned. Bill O. and I were setting the traveller when the main did a jibe. The boom was on the port side jibing to the starboard side. Both our heads were down adjusting the traveller when it jibed. Since I was at the helm, I was not paying attention to my duties. It hit Bill O. on top of his head and he almost went overboard. He had enough sense to grab the stanchion and life line. He stopped dangling from that at about the level of the toe rail outside the lifelines. I went over to haul him back aboard. Initially I could not grab him securely enough. That's when I saw his life preserver with the safety harness shackles and grabbed that. I hauled him back aboard with much relief. We checked his head. There was not a bump or bruise. He did not even get wet. We were lucky and all realised it.

We rounded 18. We ran close hauled back tacking about 6 times. Nothing else happened out of the ordinary.
Posted by Ken of Aventura at 1:16 PM No comments: 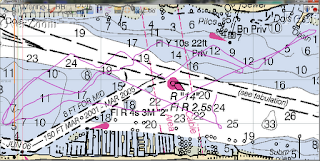 The race course was listed as S-1-4-1-3-F. The committee boat was set up south of buoy 14 as the finish. Poncho set a starting mark out south of the committee boat. The winds were up to 14 knots at the start of the race. We had a good start, crossing the start line about 10 seconds after the horn. Our plan was to stay in the channel and use its current to push us to the windward mark. The mark was placed up into North Channel upstream from the Tomahawk Island wing dam.

We did not round the windward mark first. Estralla del Mar did. Our first tack was too soon. We were doing great speed and then tacked to starboard. It shows in the track above that this was not the wisest move. We over estimated the current carry the first time. We had a full crew again. So Chuck was foredeck. He had problems with our whisker pool and it seemed to take forever to get it set. Bill O. even went up there to help. Chuck needs to spend some time with the pole and make friends with it. We will practice it this Thursday when there is no race. On the first downwind leg, we stayed closer to the Oregon side thinking the current would be less and we could get better speed than those boats that stayed in the channel. We were behind Estrella by about six boat lengths by the time we rounded the mark. The mark is the eastern most end of the track.

The second upwind leg we again stayed in the channel taking advantage of the deep water current. The wind was dying now. We still had the head sail furled to 100%. We rounded the mark still a bit behind Estrella but we had made up some in this leg. The first tack after the mark was too soon, from observation of the OpenCPN plot. We stayed in the channel again as long as we could. Then we tacked to the mark. The wind was dying even more as we rounded the mark. The second downwind leg was just a problematic as the first. Chuck really has to make friends with that whisker pole. We crossed the channel as best we could. At times the wind headed us and we could make upstream more. After crossing the channel, we were able to turn into a beam reach to the mark. Poncho was sitting at the mark with the course shortening flag and we were able to finish second. We were also the last boat to finish in our fleet as the wind continued to die. Two boats finished out of 5 that started.
Posted by Ken of Aventura at 2:32 PM No comments: