I was pleasantly surprised last night. My normal crew had to be elsewhere. I could not find a crew. My better half volunteered to crew. Now, Hannah is not what I would call a sailor. She will pull lines. She will allow the boat to heal. You get the drift. She was a trooper last night and came out to crew with me. I thank her profusely.

The second surprise was when Jerry Armstrong and his brother-in-law, Mike, volunteered to crew. They normally race "Trigger", an Ericson 23. I guess they wanted to see what sailing a slightly bigger boat would do. I really appreciate that they did crew with me last night. On the final downwind leg of the race Jerry kept the sails trimmed for top speed. Nice job.

The course was T: Start-1-5-1-3-Finish. The wind built about 6:30 to about 8 knots. It was a flukey wind generally from the northwest. We avoided an early start by doing a 360, but "Hail, Yes!" was too close to do a tight 360. We got a decent start, but was last over the line. At least we did not have to go around for being early. We started on starboard tack, close hauled and made our way to off Tomahawk Bay Marina entrance where we tacked to port. Then it happened. The head sail halyard came loose and the jib got baggy. That's when Jerry jumped into action and was figuring out the lines and line switch when the main sail halyard came loose. The chart track shows the green scrigglely on that tack. We rounded the windward mark last, but not far behind. We were able to pass one boat by the time we got to mark 5. Everyone else was going to the Washington shore then tacking to starboard tack. I wanted nothing to do with the shore and its flukey winds. We tacked mid-channel. We also waited longer to tack to the mark, which allowed us to round the mark and go straight to wing on wing. Jerry sorted out the whisker pole by then and did a very good set. But it was a short set because we were able to turn up and do a very broad reach instead, which gave us better speed. This better speed carried us to the final leeward mark ahead of all the boats except "Estella Del Mar" which for some inexplicable reason took off cross river after the mark. Maybe he was sailing another course like we did the first race of this series. At the mark we went from port beam reach to starboard close hauled to barely make inside the finish mark. We got an unexpected horn when we crossed the finish. 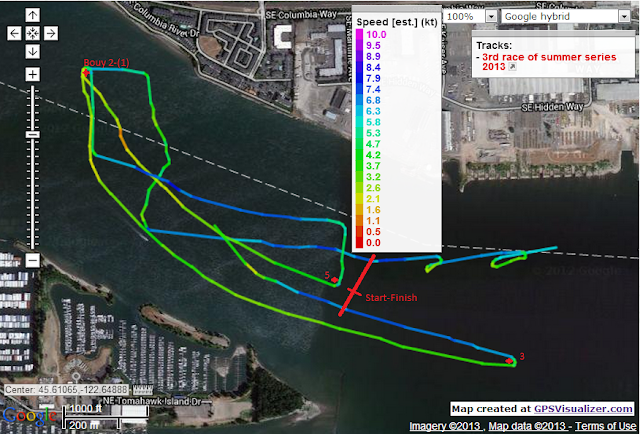 Results are in. We finished second. We were 3 minutes 27 seconds behind "Estrella Del Mar". The horn was just for fun.
Posted by Ken of Aventura at 11:24 AM No comments:

It wasn't. Bill Street kindly came to crew. We motored out. We even raised a sail. We did not anchor choosing to idle at river speed near the committee boat until they called the race. 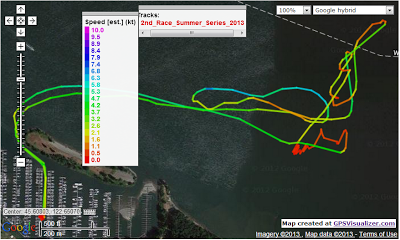 The little red squiggle lower center is where we waited for the race cancellation.
Posted by Ken of Aventura at 3:29 PM No comments:

First Race Fiasco SYSCO Thursday Night Summer Series 2013
There was a race, but we did not sail it. The board called out a "W" course, but we sailed a "WW". My statistician wrote done the "W" correctly. When he wrote down the marks, he wrote the marks for the "WW" course. The "W" course is Start-1(which is buoy 2)-4-Finish. The "WW" course is double that, Start-1 (which is buoy 2)-4-1(which is buoy 2)-4-Finish. Once we realized what we had done we went to the finish and at least we did not get a DNF. Everyone else finished within 45 minutes, we finished in one hour and fifteen minutes. Geeeesh.

We had a decent start. We were about 3rd over the line. Others were early and got themselves very out of shape for the start. We were fourth around the first windward mark. We decided not to put up the pole. We were doing fairly well to begin with, but soon started to loose ground with those who had put up their poles. We put up our pole. But we had lost much ground by then. We were 5 around the leeward mark. We were even behind Trigger. Since we thought we had another windward mark to go to we went way out into the channel on port tack. We turned the corner and headed downstream to the windward mark. We were rounding the mark when we noticed La Dolce Vita furling her sails. We commented that something must have happened to them. Someone must have been hurt or something broke. We put up the pole this time and made good time to the leeward mark. That's when we noticed that there were only the big cruising boats down there. I asked to look at the course sheet again. That's when we realized we had sailed the wrong course. We turned around and headed upwind to the finish line and finished the race. We noticed the race committee yelling at us as we went by the committee boat the second time, but could not understand what they said. They were probably trying to tell us we were doing the wrong course. 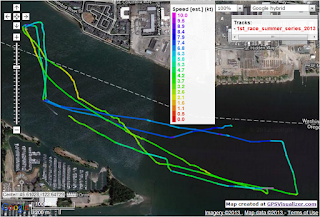 We had a new crew member last night, to. What a night to show him the lines. Hope he comes back. He proved to be a valuable fore deck person.
Posted by Ken of Aventura at 8:27 PM No comments: