This race was great for us.  The winds were 6-8 knots out of the southwest.  Starting line was setup pretty close to the Liberty Ship Ramps near Ryan Point.  This did not allow much room behind the starting line.  The course for the sixth pennant fleet was R-C-14-Cs-R.  This was a really nice course that was a change from the windward/leeward courses.

The starting line was laid out downstream from the committee boat(CB).  We got to the committee boat just as they put up the "come within hail" flag.  We had time to run the course before our estimated 6:50 PM start.

I mistook the "B" mark for the "C".   So we lined up on the mark from the starting line and sailed to the "B" mark instead and noted the wind veering due to the trees at the east end of Tomahawk Island.  Then we noticed the mark in front of McCuddy's marina.  It was then we checked the course map and discovered
my mistake.  So we sailed to that mark and headed for 14 noting the wind.  About that time the races started.  We headed over to the CB to get a good time check.  We hung around upstream from the CB until four minutes to our start.  We watched the 5th fleet start an noted what they did.

Our strategy was to start on starboard tack near the CB.  But there was little maneuvering room behind the line for 8 boats.  We managed to get a good start crossing the line about ten seconds after the flag drop.  We were in the lead and had clean air.  About half way to the first mark we were two boat lengths in from of second.  The wind shifted slightly and we adjusted our sails and took off.  By the time we were at the mark we were four boat lengths in front of second place.  We rounded the mark and did not set the whisker pole like some boats.  I did not want to because the wind was right at the starboard stern quarter that is perfect for Aventura.  When the wind would build we would pick up speed.  When it died, we would get to almost a beam reach because of the change in apparent wind.  By the time we rounded 14 we were about 8 boat lengths in front of second place.  We stayed on port tack after 14 until we could make the mark on starboard.  We tacked a little soon but with the help of the current, we made the starboard rounding of the mark just fine.  Since we were sailing in clear air, we were about 14 boat lengths in from of second place by then.  We round the mark on starboard tack and stayed their going to starboard broad reach.  Again the wind favored us and we headed straight to the CB.  The rest of the fleet was just rounding "C" mark.

One thing that helped a lot on the race was the cleaning of the boat bottom with the brush at the dock.  The one problem of the night was the malfunction of the knot meter.  Aventura has always had difficulties with any knot meters.  I end of calling them the "not knot meters".

Below is the race track.  Again the track is every 15 seconds.  I thought since I had set it before to every second that the setting would stick.  Obviously it didn't.  Another detail to pay attention to when making these tracks.  This track shows us cutting the corner at 14.  I can tell you we did not.  It is just the sampling interval was too large to show our rounding. 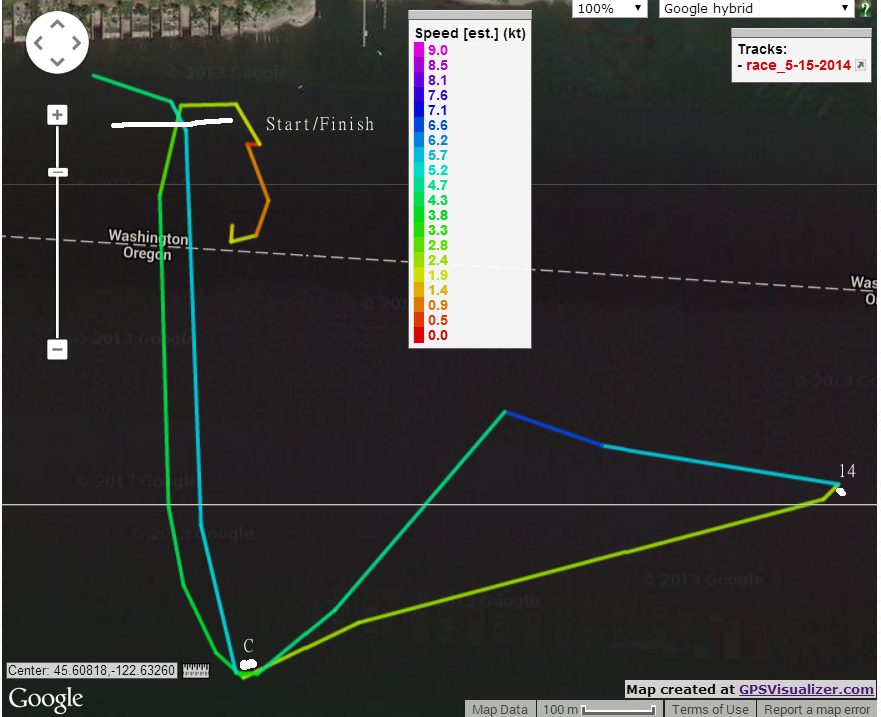 Posted by Ken of Aventura at 11:00 AM No comments: