What a good experienced crew can do

SYSCO RACE Summer Twilight Series, 2016 I am in awe of my crew. They are the difference between finishing fourth and second. I did have experienced crew last week, but he was by himself and did not have assistance of our other experienced crew. When the two get together, they combine to form a team that just makes Aventura go.

The race course was new to us. The RC chose windward leeward course V, S-1-4-1-3-F. It was just right for the conditions. The wind at the start was 12 knots. The start was near B mark and toward the channel more than the last races. We ran a timing start early and determined that we could start at the barge on the north shore at 2:40 from the start. We were right there when we started. We ended up starting before most of the boats but behind River Weasel (RV). She was right on time and stayed in front the whole race. We however fought for second place.

At the windward mark we were fourth around it. We set the whisker pole to port. We determined that we would round the finish line to the Oregon side before the race. We observed white caps along the Oregon shore earlier this evening. We ended up rounding the first leeward mark behind La Dolce Vita (LDV), RV, and Blew Streak (BS). But we pick up a place when BS did not perform their pole dropping smoothly. We went to port tack and stayed on the tack long enough to make the starting line. Other boats, RW and LDV did not and had to tack to port tack to avoid the finish line. We stayed on starboard tack as long as we could. We finally tacked to port only to discover that BS was coming down on us. We had to duck. This ducking was the closest we did without colliding with the boat as I have come. We must have missed her by only a foot or a little more. It turned out to be advantageous for us. We tacked to starboard to make the mark and only had RW and LDV ahead of us.

We again set the pole to port, but this time I headed straight down to the mark passing close to the committee boat and over the starting line. We managed to stay abeam of BS and pass LDV, but RW was too far ahead to do anything about. When we rounded the second leeward mark we managed to do it smoothly to port tack while BS had trouble. We passed them and maintained port tack until we were able to make the finish line. We were second to finish.

I really like have my experienced crew with me do the races.

Congratulations are really due to William Street and Bill Ormond. They are the best.
Posted by Ken of Aventura at 9:18 AM No comments:

The crew tonight was Bill S. and Chris D. Bill is experienced, while Chris is a newbie. I rely on Bill to help train the newbie. Sometimes it works.

The race tonight was TT, Start-1-3-1-3-Finish. The wind was out of the west with a little northing to it. It was from 8 to 10 knots with gusts to 15. The committee boat was having a lot of trouble staying put in this wind. She kept overriding her anchor. Poncho setup the start and finish buoys in line with the boat. After a few minutes the committee boat had to reset its anchor. This made the committee boat the favored end of the start line.

We decided to port tack the fleet starting from the committee boat end of the start on port tack. If the rest of the fleet did the conventional start, we could cross in front of them and get to the channel and tack to starboard. This all hinged on timing. For some reason we did not get our timing right and started a little late. We ended up crossing behind most of the fleet. There is a wiggle in our track caused by a boat coming from starboard. We yelled "ducking" and started to turn, but the other boat panicked and blew here horn and yelled and turned. No contact. She should have stood on, since she was stand on boat. We managed to get ahead of Wildheart by the windward mark. We set the pole to port as usual in this kind of wind. We made up quite a bit on the rest of the fleet. We rounded the leeward make third. Back to the windward mark in three tacks. Set the pole to port again. Made up quite a bit more on the fleet, but could not catch La Dolce Vita or River Weasel. All we had to do is beat La Dolce Vita for first place in the series. We round the second leeward mark about 5 boat lengths behind La Dolca Vita who took a port tack to get angle on the finish line. There was a Ranger 20 between us and La Dolce Vita. We were overtaking the ranger when they lost it and started coming at us. We were close so we panic tacked to starboard. We lined up and saw we could make the finish mark on this tack. We might be able to make the line before La Dolca Vita because she spent a lot more time on port tack than we had. That's when you can see the yellow segment of our track. We got in irons. I was fiddling with the main sheet instead of steering the boat. We ended up back on port tack and got the boat straightened out and tacked back to starboard tack to get to the line. But by then we lost our advantage on La Dolce Vita.

We got second on the series and third on the race. 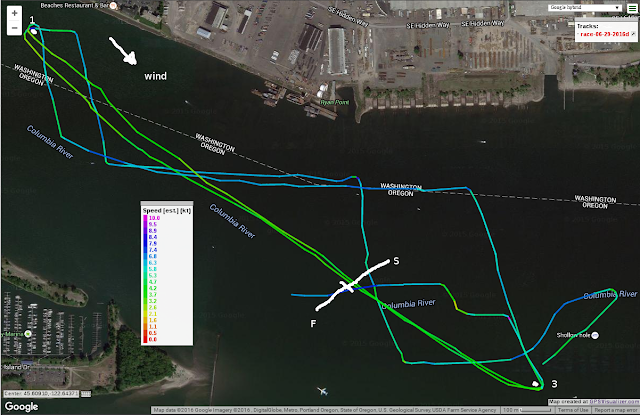