I am back. After quite a time not blogging. I have tracks. I have crew. Aventura has a new bottom job. We are ready to race. We are assigned to Cruising Fleet C. The boats in this fleet are: La Dolce Vita, Wildheart, Blew Streak, and us.

I did not get a track on the first race with my new crew, Jon, John, Marv. Marv is only on the crew for this race, but he is an experienced and helped a lot with the strategy and educating the new crew member, Jon. We finish 1st. Everyone carried their weight. It was a Start, 1, 3, 1, 3, Finish race. We sent Jon up to the bow to set the pole. We had verbally gone through the routine before we did this, but verbal is a lot different from actually doing it. He missed setting to pole and had the presence to lay down on the deck to stay on the boat with the sail flapping and all the chaos of the first rounding of the windward mark for the season. I handed the tiller to Marv and went forward to help Jon. We got the pole up and settled in for a great run down to 3. We rounded three and set to port tack and headed back to 1. This time Jon set the pole with alacrity. We rounded the leeward mark 3rd in the entire cruising fleets and finished 1st for the C Fleet.

May 2nd is the second of the race series. This was the "standard" Start, 2, 14, Finish race. The crew this time was Jon, John, and Eric. Eric was new to the crew, but had some experience and lessons on sailing. We refreshed his memory of how to use self-tailing winches. We had a good start. We went to port tack just after passing the starting mark to get away from the other boats. We rounded 2 first in our fleet. Jon set the pole to starboard this time. The wind had a little more westerly than the previous race. This gave us the ability to head straight for 14. The wind shifted north once we passed Ryan Point. We swapped the pole to port. We had a substantial lead by that time and I was not worried about loosing time. You can locate the swap in the small red section of the track. We rounded 14 and stayed on port tack for a little so that we would not have to tack again to make the finish line. We finished first. 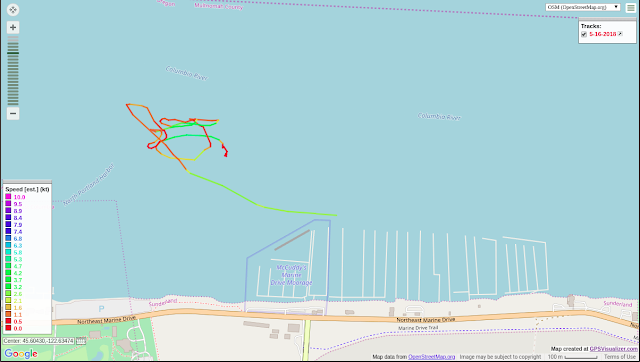 May 16 race was called due to lack of wind. All the crew showed except to John. He had duties as head waiter for the Rose City Yacht Club's Lady's Dinner. Just as well. No wind. The tack is us motoring around except for a small bit of sailing at less than a knot upstream. That's when the RC call the race. 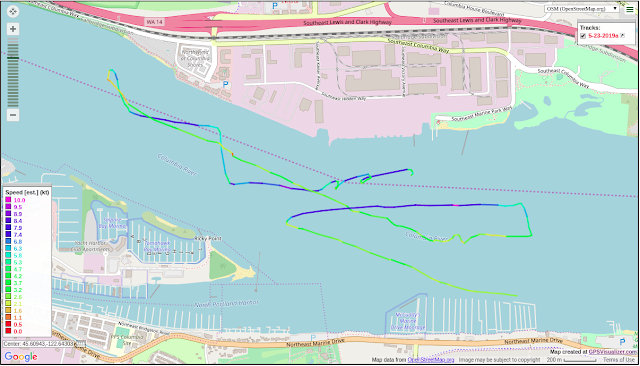 May 23 race was the "standard" race, Start, 2, 14, Finish. This is the first time La Dolce Vita (LDV) has shown. The boat was in an accident this winter and had been on the hard until now. It was good to see her out. We had a so-so start. But we continued on starboard tack for a while until the traffic got too dense. Then we tacked to port until we were in the channel. Tacked back to starboard and found we had to duck boats. We were second around 2. Set the pole to port and caught up to LDV about half way to the leeward mark. It was fun playing with LDV. I should have steered clear of her, but didn't. About 3/4 to the leeward mark the wind again had shifted north. We were going so fast that the head sail was getting back winded. I tried to get to windward of LDV. Got there. But the point of the wind was too far forward for good speed. There is a yellow portion of the track that shows where we were at the time. We went from 4 knots over the ground to 2. We dropped the pole and set a broad to beam reach, but by then LDV had dropped us. We rounded the leeward mark well after LDV and in second place. Again we stayed on port for a little while and tacked to starboard. We finished second. 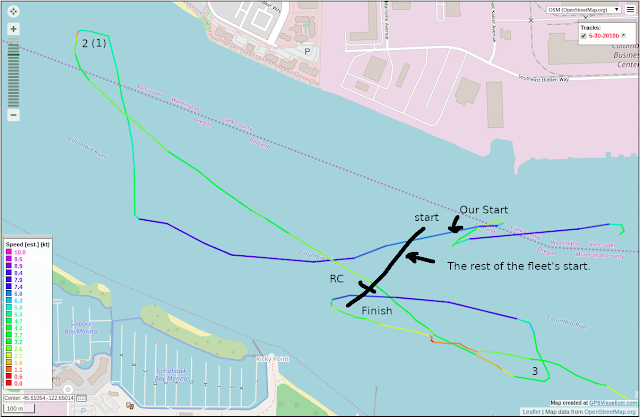 May 30 race was a short one with 6-8 knot winds. The course was "T", Start-1(which was actually buoy 2)-3-Finish. The crew this week was Jon, Bill, and Liv. We stayed on starboard tack for a chang,. since we started over one minute after the rest of the fleet. I still don't know where that last minute went. But I distinctly remember hearing the Prep Flag horn for the next race as we went over the start line. We stayed on starboard tack since we had clear air. The rest of the fleet was already halfway to the windward mark. We did round the windward mark last, duh. But with Jon's expert pole handlng we managed to catch up quite a bit. LDV and Blew Streak were a few boat lengths ahead of us. We ended up catching LDV, but could not catch Blew Streak. We again had a little problem taking the pole down, but it was better than last week. We rounded the leeward mark third and stayed on port tack until we could get a straight line to the finish. We finished third. We were 1st place for the series. Thanks to all the crew.
Posted by Ken of Aventura at 4:07 PM No comments: