We came in first. Wow. Crew was Bill O. Just the two of us. The course was W, S-1-4-F. The wind was 8 knots out of the west with a slight northerly direction.

We had a decent start. We were second right behind Vaporware. But we had River Weasel, La Dolce Vita, and Blew Streak to windward behind us and two boat lengths upwind. We were stuck for a while behind Vaporware in dirty air. I wanted to go to port to get into the channel for the downstream push. We were on the Oregon side and in shallow water. We could get a better push in the channel. I had to slow down enough to pass behind both River Weasel and La Dolca Vita. We did and tacked to port. We passed closely behind La Dolce Vita. I did not like doing that, but we were not winning the race where we were.

We tacked to starboard at the wind line near the Washington shore. The only boat to pass us in front was La Dolce Vita. They did a great job moving upwind. We had to tack twice more to make the mark. We were right behind La Dolce Vita on the line to the mark when Blew Streak tried to barge in. She came up on port tack and went to starboard tack right under us. She had no rights after doing that. I did avoid her a little bit, but nothing to protest. She did slow down and follow us around the mark. We set the pole to port and headed sort of toward the Oregon side keeping the wind on our port stern quarter. The fleet stayed in the channel and headed straight up river. We kept meandering over to the 20 foot depth and followed that to the leeward mark. The fleet being in the channel lost ground to us and by the mark, we were a good quarter mile ahead of them.

We rounded the mark and came to a port close hauled tack. Went out toward the channel and tacked to follow Barcode to the finish line. First place is sweet for the last race of the season.

On our way back to the marina, we ran aground. You can see where we were by the bright read line at the end of the track. Aventura draws 4.5 feet. The Columbia should never be that shallow, at least, not there. We got off by my grabbing a shroud and leaning out over the toe rail with the engine in full reverse. 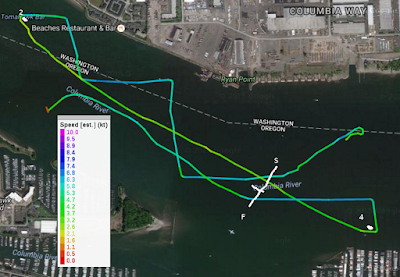 Posted by Ken of Aventura at 2:12 PM No comments:

Nice wind that night. Crew was Bill O. and David H. David was new to the boat, but experienced crew. Bill and he worked well together. We had a few ragged tacks but for the most part they did well. The course was #10, C-2-X-C.

We did as I wanted and did not get far away from the start line. We ran it twice to get an idea of how the boat went and to figure how the wind would be. We let out only about 50 per cent of the head sail. That balanced the boat quite well for the wind conditions at the start. We started about 15 seconds late, but was first across the starting line. Blew Streak (BS) was second with La Dolce Vita (LDV) way back. We were second around the windward mark right behind BS. We tacked to port right after the start and tried to keep in the channel for the current boost. The track shows I tacked soon, but I was worried by the northing of the wind and the shadow of the buildings on shore. So I tacked soon, but kept us in the channel. We were second around the windward mark. We set the whisker pole to port. and kept up with BS. LDV and the rest of the fleet was well behind us. We rounded the leeward mark with BS and followed her to the finish line.

One thing I am thinking of at the Friday morning quarterbacking is that instead of following BS to the finish line, we could have gambled and tacked at the same time she did and maybe would have gained a little on her. But that is moot, now. 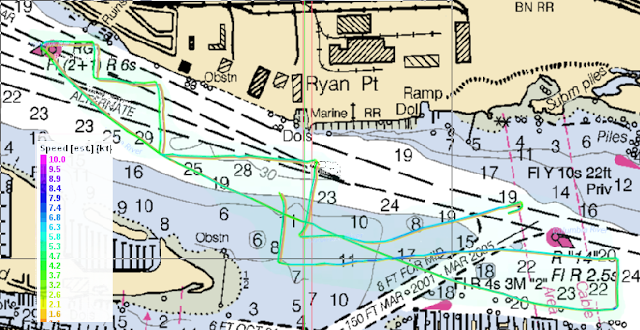 Posted by Ken of Aventura at 3:38 PM No comments: