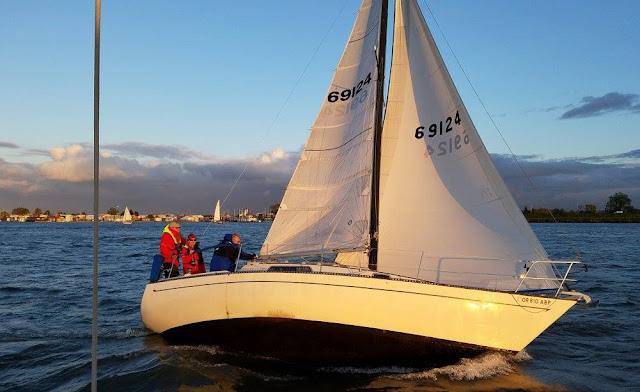 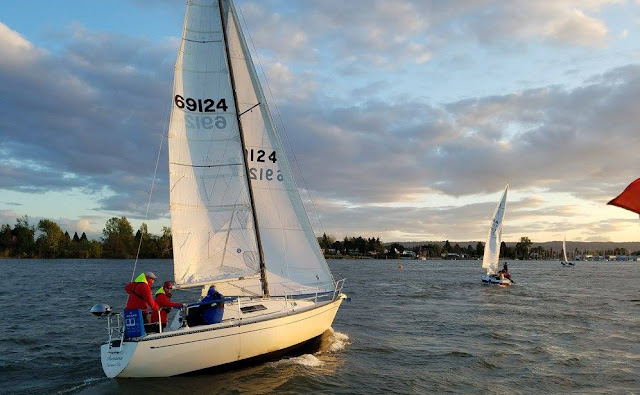 The first race of the SYSCO SPRING Thursday Series was last night. I have a new crew member this year. She is the wife of a long time crew member.

We placed third in our Pennant. Four boats are in our group, La Dolce Vita, River Weasel, Blew Streak, and Aventura.

The wind was out of the WSW at about 8 knots. The course, 'T', was set up with mark one across from Tomahawk and mark three was off of Salty's. The start was tucked in at 'C'. The wind when we first got out there was from the SSW. I wondered why the set the course as they did, but mine is not to reason why but the race or die.

We figured with the wind as it was, a port tack near the committee boat would be a good way to start. The start started well, but quickly turned against us. Boats on starboard tack have the right of way over boats on port tack. We followed La Dolce Vita on port across the starting line. he beat the boats on starboard, but we did not. We were forced to tack to starboard to give the right of way to the starboard boats. It took us some time to recover. Meanwhile the boat that we followed went blissfully ahead of everyone. He was in clear air. We was in messed up air with all these boats around us. We managed to tack to port and discovered we were in third place. Blew Streak was in worse shape than we were.

We rounded the windward mark third. Set our wing on wind with the boom to starboard, which we had to change because of the wind being in the wrong quadrant. We were second place for a while until another boat spoiled our wind. River Weasel chose to run down the middle of the river. For a while we were easily ahead of him. But We tried to get away from Vaporware, but could not shake him. We rounded the leeward mark third and finished third. The wind was great. The water was smooth. There is another race next week.

No plot of our race. The start of first race of the season is always hectic.
Posted by Ken of Aventura at 9:26 AM No comments: